Truck Campers can be hazardous to your health!

I had an accident today and will probably suffer from the effects of it for a while. I was trying to insert a full propane tank into the camper. It's a small tank and I can handle it fairly well, except that the bay is up a little higher than on a 5ver, plus the tank lies horizontally in the bay. So I stood on a small 4-legged stool and tried to hoist it up level with the bay so I could get in and situated. I might add that it's a very tight fit as well. (I originally posted that the tank is in the bay in a vertical position. Maybe the bump on my head got me confused, but it lies horizontally.)

I must have leaned back slightly and the stool tipped, I hit the ground on my tailbone still holding the propane tank which must have been what cut my lip, and then my head hit the ground really hard. I just lay still for several minutes wondering if I had broken something. Finally I was able to move both legs, then into a sitting position for a minute, and then stood up. I have been hurting ever since, but it's not likely that I broke a bone or got a concussion.

I'm going to look online to find the hours for the Urgent Care facility in Salome, and depending on how I feel in the morning I might drive the 30 miles and hope they can x-ray me. At least I would like a prescription for the pain, although I can't take Vicodin or Tylenol, which seems to be the prescription of choice. I'll live, but I might start back for Sacramento sooner than I had thought.

The truck is ready for the camper to be mounted, but if I need to go to get a medical check then it can wait.

On a much happier note, one of the campers in an nearby site came over to say that a roadrunner he feeds now and then had gotten into a structure where he stores water barrels, and which is enclosed in a heavy black netting. Of course I had to go see it because I've never seen a roadrunner in person, and I got some pictures of it. Tim said the bird had let him get some good photographs, including one that was close enough to show its eyelashes! 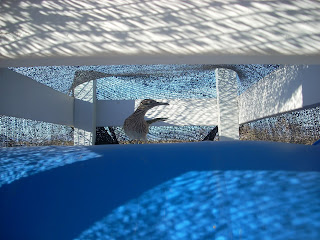 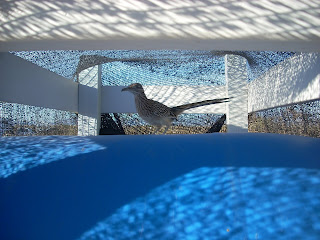 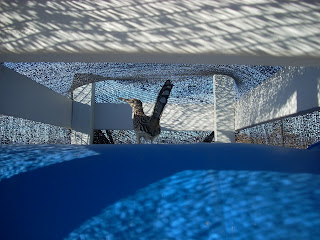 After I had taken the photos Tim lifted the netting on one side and I held it open on the other, and the bird flew right out. (The blue in the picture is the water barrels.)
Posted by Gypsy at 7:01 PM