A loss in the family

I just got word that my brother-in-law passed away at home in Clermont, Florida. He had battled congestive heart failure and at one point was on the list for a heart transplant. That wasn't to be, and my sister took him home from the hospital in Orlando, where he had hospice care.

He was born in Manzanar (Internment Camp) in 1942, and after the war his family sharecropped for a time as their land and all possessions were taken away from them when they were sent to the camp. They were soon able to save enough money to buy land, and after a number of years became the hard working and prosperous farmers they had been before the war. I might mention that every member of his family, as well as extended family, were all U.S. citizens.

Mitsuo met my sister Julie when they both worked for the Sacramento Corps of Engineers, and after their marriage they soon moved east where he worked in Baltimore and she entered nursing school. They were mainstays for me and my children when I moved to Virginia in 1989, and we visited them many weekends.

This picture was probably taken in Cincinnati at the time of my Mom's funeral: L-R Mitsuo, Uncle Joe (my Mom's brother), my brother Rob, and me. 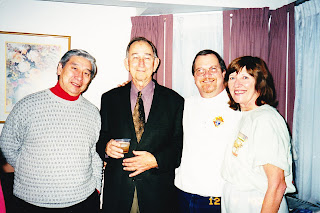 We will all miss him and share in my sister's grief, but I am so glad he isn't suffering any more. He went through a lot trying to stay alive for the transplant, which was not to be.
Posted by Gypsy at 12:31 AM