The signs along US 395 in eastern Oregon refer to this scenic byway as the Oregon Outback. I've never been in Oregon before now and I'm finding this part of it very interesting as well as stunning, although folks who are familiar with and love the coastal areas would probably think they are in a different state. I'm not used to hearing traffic noises at night and didn't get a very good night's sleep. I miss the forest already, but it is certainly nice to be plugged in to electricity. It's hard for me to not turn every light in the rig on, just because I can!

I've started reading blogs again but doubt I will ever be able to go back and read them from where I left off. Reading the blogs is fun -- what I don't look forward to is finding out what has been going on in the world. You can't imagine how blissful it has been to not know and not really miss what has been happening, or rather what has been reported by the media.

It turns out that US 395 and US 20 are as good in parts as any interstate, but only one lane wide and little or no traffic. Parts of it are mountain passes: I don't mind saying I got a little tired of Drinkingwater Pass, and Stinkingwater Pass, but I plodded along and am now at an RV park in Vale Oregon, about 30 miles or so from the Idaho border.

These US routes are part of the original Oregon Trail, leading me to fantasize how the pioneer women must have felt: "What was I thinking when I agreed to this? I could be back in comfortable and civilized Philadelphia"! That led me to wonder if I would have been able to be a pioneer woman and I immediately thought, "Nah"! But then, some readers might consider that I opted for a return to a semi (but comfortable) life without electricity or communications in the backcountry of Lassen. So yes, maybe I could have been a pioneer woman. That is, if I had been enthusiastic about the idea in the first place. If a man told me, "Woman, we are going to leave comfortable Philadelphia in this rickety Conestoga Wagon; face dangers from the elements and months of travel, fording raging rivers and fighting off hostile Indians; when we get to where I want to stop and settle, you will home school our 12 children, keep a huge garden and help me with the ranch/farm/whatever; raise and milk the cows & goats; raise the chickens and cook them on an old wood stove for which you will chop the wood; sew everyone's clothes and face enormous hardships, grow old before your time because of the harsh climate and lack of feminine beauty supplies, have sex with me whenever I demand it, and face massacre at the hands of irate Indians whose land we will steal out from under them. . . " I don't think I could handle that!

So I drove into Vale and stopped for fuel at a Sinclair station. I fit perfectly well under the canopy but had to drive around to the diesel pumps, and was watching the rig in the opposite mirror of what I should have been. I think I did a bit of damage, which I'm going to drink a few beers and try to forget tonight. At least I have electricity and have set up my desktop, so maybe I can get into the chat room this evening. (Excuse my spelling after having the few beers though.) I think I will just unplug and travel with the monitor on the bed, and it will be easy for me to set it up every afternoon when I stop. 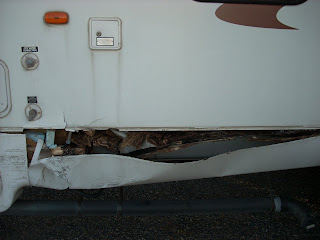 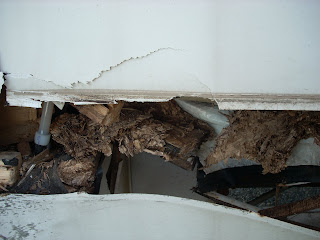