I quit today at 1:15, and now that's more like it. In a way I hate staying at motels, mainly because of the cost, but the wind and predicted rain kept me coming back to take the easy way out. And easy it is. Just register, pull the truck in and take a few things inside (well, sometimes more than a few things), but all in all it seems quicker than setting up a tent. It is also quicker than pulling into an RV space, trying to find the level spot and still reach the hook-ups, hooking up to at least electricity, lowering the stabilizer jacks, putting out the slides, make a quick run through to see if anything slipped or slid during transit, and then heading to the fridge for a cold one.

This is much easier, and I'm finding that after driving 5-8 hours I don't feel like doing much more. Today I drove about 220 miles after leaving the White House Inn at 7:45. I stopped at DeSmet and visited the Laura Ingalls Wilder gift shop for a nice chat with one of the docents. I bought some things for the grandkiddies as well.

They were leading a school bus tour in just a few minutes and I would have had to wait until that tour was over. It involves walking around several blocks of the town, and thank goodness I am not one to have to see every museum and take every tour. I enjoyed the chat more, and did walk around some of the landmarks nearby. The Ingalls family lived in the Surveyor's house at one time. The little tiny school house is probably a replica of where she might have attended when she was younger. Believe it or not, I attended a school in Kentucky for a short time that had those kinds of desks - double desks for 2 kids. 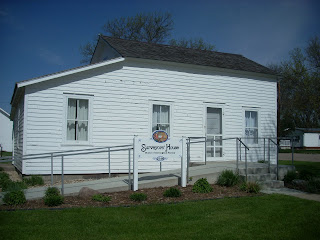 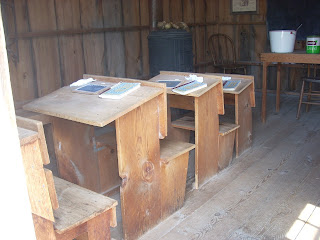 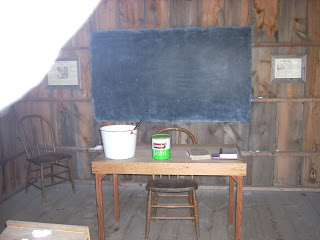 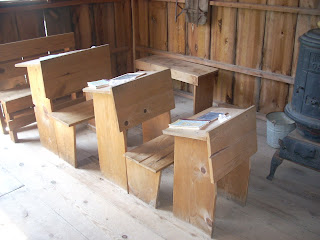 I took some other pictures with my film camera and if they turn out to be ok I will post them later.

I then went to Madison where MyDakotaAddress is located. Here are some shots of Teri who runs the operation, as well as the building itself. 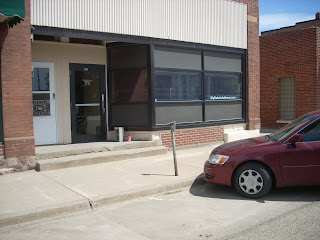 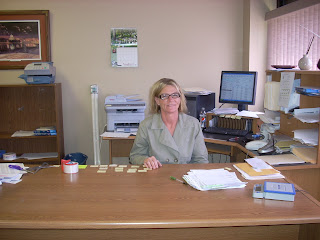 Madison is a really cute little town. I love the fact that each store is unique and not like a shopping malls which have the same stores across the country. I also love the diagonal pull-in parking, which reminds me of Black Mountain, NC. 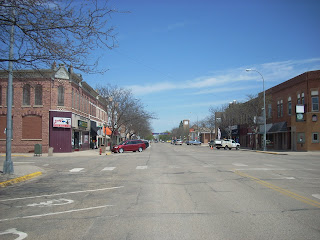 I ran into more water across the road today. There were warning signs but no pilot cars to lead you through, and not much traffic. There were stretches with water, and then some without. Lots of small ponds or lakes in that area and the road runs straight through the middle. There must have been a lot of bugs hovering in the area because my truck is covered with them. As soon as I got Lady settled inside the room I went out and cleaned the windows and headlights.

Speaking of Lady, I notice that when I bring her into a motel room and then go back out to get some of our belongings, including her food and water bowls, I find her in the bathroom. Today I heard her slurping out of the toilet - caught in the act. I've never known her to do that before, but I always close the lid so I guess she doesn't have much chance at home. She hasn't been eating as much while on the road, but she can't seem to get enough water.

Another thing about the town of Madison - I think I would love living here. It is small but just big enough that you can get what you need locally, but close enough to Sioux City that you can find whatever you need there. There are lovely tree-lined streets, with small cottage type houses that I would like to find in Sacramento or New York, to rent of course. I don't ever want to deal with home ownership again. But Madison SD isn't near any of my kids, so I don't think I could live here. I'm to the point of thinking about spending a winter in the cold, however. A dry cold isn't so bad if you dress warmly for it, and if you don't have to drive in snow.

I did several "last checks" of the motel room this morning before turning in the key, and I'm sure I have everything. I can't seem to find my electric cord that charges my computer and I will get frantic if another trip to the truck doesn't turn it up. I'm on 79% battery power right now, so I'll end right here.

I almost forgot - yesterday afternoon I searched through all the stuff in the truck bed and found the parts that came off the clip. Believe it or not, it only took me about 10 minutes to figure out how to fix it, but fix it I did! The bumpy roads must have worked it loose until it fell apart. I'm sure the more mechanical of you would have immediately known how to put it back together again, but I was to the point of quitting a couple of times when it became clear to me. I hope I don't have to do it again though.

UPDATE: A call to the White House Inn confirmed I left the charging device there, and they will mail it to me in NY. I called a local store that carried Apple products and found a new one would cost $79.99. Needless to say, I won't be doing much computing between now and when I get to NY!
Posted by Gypsy at 2:48 PM