I thought I left Wells this morning at 9:00 but it was only 8:00 am. I thought I stopped in Idaho Falls at 2:30 but it was really 3:30 pm. Ahh, the time zones! I know where they change on I-40 and I-80, but not further north. I covered a little under 300 miles today, and didn't end up where I intended. I think the reason my timing was off this morning was that the man next door turned his tv on at about 5:20 am. At least that's when it woke me up.

The extreme northern part of Nevada is really stunning. Not a lot of color, but some great rock formations. I prefer the high desert and so I enjoyed the drive. At Twin Falls, Idaho the road crossed over the Snake River, which I think is the most beautiful river west of the Mississippi! It snaked along a deep gorge carved out of the rocks, and I would love to have taken a picture. Because there was road construction and a lot of confusion on both sides of the bridge, I didn't see the scenic view pull-out until it was too late to get to it.

I drove on to Craters of the Moon National Monument, stopped at the Visitors Center and then drove through the campground looking for a good spot. Most of the sites aren't level enough for a tent, or else all the level sites are at the bottom of the hill where the families with lots of kids, bikes, and toys were staying. The road through the campground loops is extremely narrow and winding, with very tight curves that aren't designed for a dually. I finally found a large level site, across from a water spigot and the restrooms (that could be a plus or a minus), and decided to set up my tent.

Yeah right. I set the ground cover down first, trying to anchor it with small rocks and then increasingly bigger rocks, which the wind blew off like a puff of smoke. I realized I might have a big problem setting up the tent in the wind, when I couldn't even get the groundsheet to stay down. I thought about the thundershowers expected for tonight and the tent flapping in the wind all night, and said "* it!"

So here I am at a Motel 6 again, although I can't say I'm very happy with this one. For one thing it has interior corridors which are not practical when taking a large dog in and out. They are terrible for carrying in luggage, food, cooler, dog bed, and whatever you need for the evening. I had to make several trips and my truck isn't parked as close as I wish it was. It cost $10+ more than the one last night and is much less convenient in every way. I even had to pay $3 for internet, but I wasn't sure where my Mifi is located in all the baggage in the truck.

Tomorrow I will head over to Wyoming and the Grand Tetons/Yellowstone. I believe some roads are still closed, so I don't know what I'll be able to see. I had tentatively planned to camp at Jenny Lake but won't do it if it is raining or very windy.

There was a quick thunderstorm last night that was so loud it shook the building I think. The noise of the thunderclaps stopped as quickly as they started, with no sound of rolling off into the distance, just a sonic boom and then nothing at all.

This is a picture I took yesterday morning climbing up I-80 towards Reno. 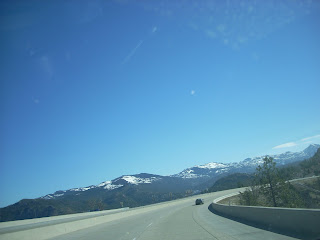 The following two pictures were taken in Craters of the Moon. I thought the snow made inteesting patterns on the mountains. 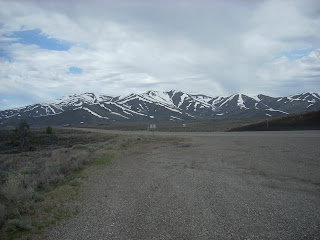 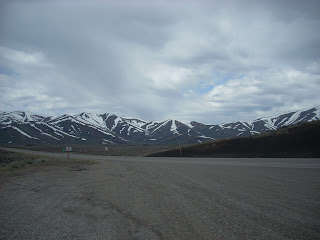 I wish I could have gotten some photos of the cloud formations. There is something about the clouds in Idaho - you can see something in each and every one, and it's difficult to watch the road when all those animals, fish, spirits, and people are floating around up in the sky. When a good shot would appear there was never a place to pull over, so there are a lot of untaken photos.

One more comment about staying in a motel: I think TV is absolutely dismal. I watched a bit last night, and just turned it off this evening after a very short time. It's ironic that I really want to watch it but there isn't anything on that I find even mildly entertaining or informative. I guess I've been away too long and everything has changed in the meantime.
Posted by Gypsy at 6:25 PM