I went to storage about a half hour early so that I could get all the boxes loaded on carts. It was extremely tiring for me as there were 23 boxes, some pretty heavy. The driver arrived at 2:00 pm, and I quickly got the carts moved to the back entrance and the loading dock. The driver just moved the carts into the body of the truck and then unloaded all 23 boxes in about 10 minutes. It's a good thing about the loading dock because the truck didn't have a lift gate, which I was being charged for. A call to the shipping service took care of that, so I will watch my credit card bill to see that the charge is removed.

As I was waiting for the driver to arrive I wondered what in the hell was so important in the entire shipment. I should have donated it all to Goodwill! I promise myself I will never move my belongings again, above what can fit into my Highlander.

One thing I discovered in the luggage I retrieved from storage was a notebook wherein I had made a list of pros and cons for selling my house and buying an RV, back in late 2008. Some of the items on the list were so naive, and some were pretty much on target. I'm a lot more knowledgeable now, although I don't know if being wiser is the same thing.

I went to four different places today in search of a 1 hour photo developing service. Walmart let me down again - they have removed their photo processor. Rite Aid's processor was broken and being serviced. Two other stores didn't even have a photo department. So I have to wait for the pictures to show them on my blog - maybe I will stop at Harrisonburg VA tomorrow evening, and the Costco is just a few blocks away.

In the meantime, I took a picture of kudzu which some of you may not be familiar with. Sometime around 1876 the plant was imported from Japan to be used for ground cover and erosion control, and was planted throughout the south. It has taken over, covering over 7 million acres in the southeast, and is a good reason why we need to avoid bringing in outsiders to our area - invasive plants (and fish & wildlife for that matter) harm the local flora and fauna and in many cases eradicates it entirely.

Here is kudzu. The tall skinny object in the photo is a huge light standard on the motel property, and as you can see the kudzu doesn't discriminate - it covers everything. Click on the photo to enlarge it. 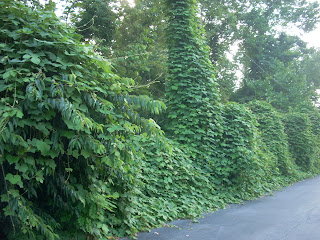 I am so tired I don't think I can stay awake until dark. I hate to take a nap this late in the day, but I'm nodding. Lady stayed in the cool, air conditioned motel room today. She still has a slight limp, but I think she is doing better. I hope she is just about over whatever it is by tomorrow because it is difficult enough for her to jump up into the vehicle, and even harder to jump out.
Posted by Gypsy at 4:41 PM