I apologize that I couldn't get the pictures any clearer, but if I had gone outside to take them the deer would have run away. Please click a couple of times to enlarge them. They were so cute - one of the fawns tried to nurse but the doe kicked her foot up and walked off, fawns eventually trailing behind. 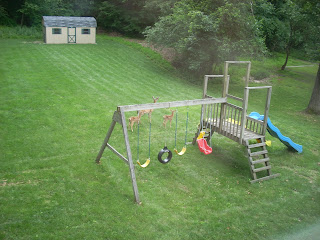 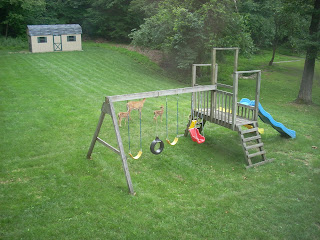 I've already received a few comments on my earlier post, one asking if it was worth the expense of the trip to Asheville rather than pay the storage fee. The answer to that is I have been paying $85/mo for two years, and now the rate is going up to $95. I think it is worth the cost of the trip, plus there are several stops I would like to make on my way.

With the Highlander I can even think about driving the distance because the fuel cost should be that much lower than the truck. I figure I can get well into Virginia before I will need to refuel, and then top off just before leaving VA, which usually has the lowest prices of any state slong the route.
Posted by Gypsy at 4:49 PM