Beautiful day for a drive

I started out today to find Rudd Pond campground in the Taconic State Park, approximately 40 miles from here. I love driving the Highlander, although I'm not sure if I will ever get used to the miscellaneous controls. I drove about 10 miles with the windshield wipers on intermittent, because I must have done something to that control stick while trying to figure out the cruise control. It's on another, shorter control stick just below that of the wipers. I don't remember ever having this much trouble dealing with simple things before now.

I eventually got the wipers turned off, a big relief on a sunny day and more oncoming vehicles than I would have liked to see, considering the wipers were merrily sweeping back and forth across the windshield. Occasionally I gave the window a squirt of washer fluid just so folks might think I was merely cleaning the windshield.

The cruise control is different as well, and I think I prefer having it in sight on the steering wheel. But I quickly realized that I push the button on the end of the stick to turn it on/off, and then for SET the stick is pushed down, and for RESUME it is pushed back up.

I took pictures of Rudd Pond, from the left end, across the water to the campground, and over to the right end. Click on the pictures for a much clearer, larger view. 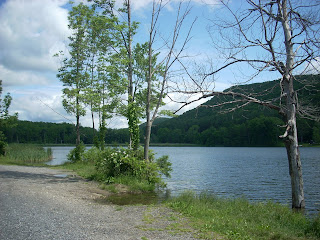 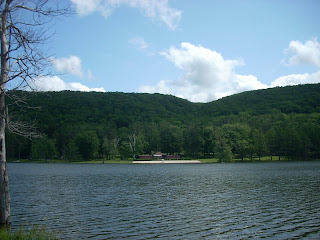 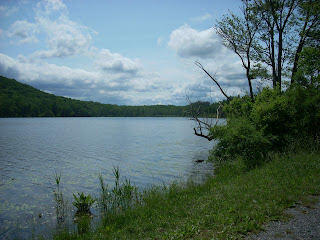 There are about 6 tent sites that are available for campers with dogs, and this is probably the best out of the 6. 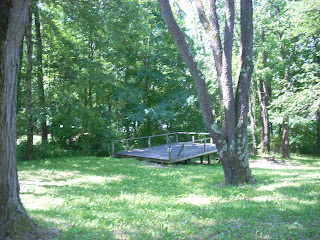 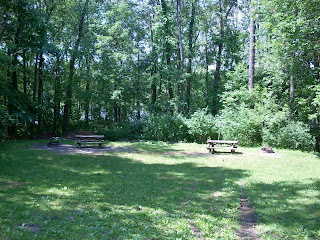 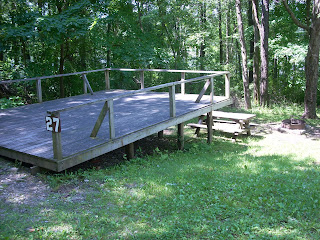 Most of the sites have wooden platforms, and the ones without are usually two sites to a space. All in all, I'd say they are too close to suite me, especially since all six sites in a row would be those with dogs. That is too many in a short space to my way of thinking.

The camp host was very helpful and loaded me down with brochures, maps, and diagrams. The New York state parks charges an extra fee for out-of-state residents, and non-residents don't get any kind of senior discount. Maybe tomorrow I will try another direction. I drove through some very beautiful rural scenery, but as usual there is never a place to pull over and take pictures, and since the road was mostly hilly and curvy, I didn't even try to pull onto what shoulder there was. The little towns I drove through were quaint but not touristy - real people live there year around evidently.

Sorry about the pictures being all over the page - I prefer them in the middle but every time I tried to upload the images Blogger would say "DONE" but the pictures wouldn't be there. I thought maybe if I did something different they might show up and they did, except the text isn't where I thought it would be. And no, I can't use LiveWriter on a Mac computer!

I stopped in at A&P to pick up a couple of items and noticed a blood pressure machine, so I sat down for a couple of minutes. My pressure was 103/49, which goes a long way in my mind to explaining why I'm having dizzy spells. I won't take anything tomorrow and then will go back to my HCTZ the following day and thereafter. I read that the leg cramps can be alleviated by drinking a small can every night (and in the morning, if needed) of V-8 juice. I'm also doubling up on the bananas.

Again, I marveled at how easy it is to park the Highlander. I am so glad I made the change. Now I have to figure out what to put down on the immaculate beige carpet in the cargo area to keep it clean and relatively free of dog hair. I may be dreaming to think I can minimize the dog hair because it seems to fly around the inside of the vehicle, landing on the dashboard and every other surface.
Posted by Gypsy at 3:18 PM