My cup of tea

I have always loved coffee since I was a little girl and my dad let me share some of his coffee with milk, no sugar. My mom was a tea drinker (milk and sugar) and I intensely disliked the taste of it. I did learn to drink unsweetened iced tea from time to time, but coffee is still the nectar of the gods, to me.

When I lived in Ireland I started drinking tea - not in the morning when I would grind coffee beans I brought from America - but lunch in the pubs, visiting and being visited always called for a cup of tea. Irish coffee was pretty dismal, usually instant, but the tea grows on you to almost an addiction. I think a lot of it was that the buildings are so darned cold that it's pleasant to hold a warm cup in your hands. My tea of choice, with milk and no sugar, was Barry's Irish tea.

When I returned to the US I thought I would continue having tea in the afternoons, but a cup of Liptons or Tetley's brought that idea to a halt. About a year ago I saw Barry's Irish Breakfast Blend at Bel Air, and nearly choked at the price of it. Today for some reason I was buying a few items at the grocery and happened to look at the display of Barry's tea, so I bought a box of teabags. After having lunch I made a cup of Barry's and brought it into the living room to savor. Oh my goodness! What a delight it was, and the same teabag gave me a second cup that was equally wonderful. I guess from now on it's going to be morning coffee and afternoon tea for me.

I finished some touch ups to the paint job - inside door frames, etc. I think I will work on the kitchen next. I bought a small sample jar of paint to see how it would look on my cabinets. The color is called "Sweet Maple" but it doesn't look to me at all like maple. I believe I will go with white for all the cabinets. You may be able to note the slight yellow in the wall paint (and just above the drawer that I painted) against the white of the stove and range hood. I think the subtle contrast will be easier to live with in the long run, and will hopefully make the room look larger.

The blue tinge showing up on the photo of the range & hood is shadow, as the picture was taken yesterday evening. I took a much better one today but can't get it to load after 4 tries. 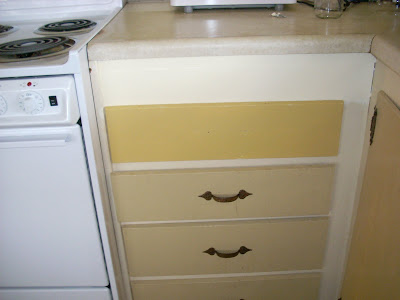 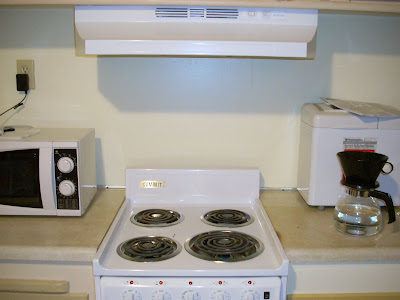 While I was out today I made a couple of stops to try to buy some 35mm film for one of my cameras. Target still carries a small number of color cartridges, but I wanted black and white. After asking several places I came home and called a camera shop that I think I can find easily, and they assured me they have color and black and white film.

I bought an Olympus Stylus 35mm camera from eBay and want to put b&w film in it - I already have color film loaded in my Minolta. When the Olympus arrived I turned it every way but loose and couldn't figure for the life of me how to turn the darned thing on. Today I purchased a battery and when I inserted it and closed the battery cover I jumped like I'd been shot! The cover zoomed open, the lens popped out, and lights started blinking. I think I'm going to like using this camera and can't wait to get some fresh film loaded into it. Nothing can equal the ease and speed of getting your pictures with a digital camera. For ME, however, I cannot see the screen and it gives new meaning to the term "point and shoot". It's something to do with my eyesight, and maybe that will improve in the future, but I will always prefer the view finder. Yes, there are a couple of digital models that still have a viewfinder, but they are more than I want to spend.

I may visit my cousin Gladys in the hospital tomorrow. How we came in contact a few years back is interesting. I was doing genealogy with a cousin in Kentucky, and we found information about Gladys' grandmother, who was the sister of my great-grandma. Finding her children led me to Gladys' mom and dad, and to their obituaries which listed 5 surviving children, one of whom was Gladys who lived in Fair Oaks, Ca. I found her address through google, and wrote her a letter to introduce myself and ask if I could meet her the next time I came to CA. She wrote back by return mail, and we've been friends ever since. It also led me to find out that her aunt Gladys was a Catholic nun in her order's nursing home in NY. The next time I was in NY my son drove me over to the little town where Sr. Gladys was and I got to spend about 15 minutes with her. At that time she was in her 101st year, and she died shortly after my visit. She couldn't speak to me, but her eyes and expression told me there was so much she wanted to say. I'm glad I was able to see her.
Posted by Gypsy at 6:35 PM