One weekend the other woman on the team, plus two of the men, plus a Korean girl who worked at the Engineer compound, a friend of hers who was recently widowed, and I flew to Cheju Island in the South China Sea. We stayed at a Hyatt hotel which was a more plush hotel than any I had ever been in before. We toured the island which was very primitive for the most part, and I'd say their farming practices were probably 75 to 100 years behind those in the US. I absolutely loved it!

We were fortunate to have native Koreans to translate for us when we got away from the hotel. The following pictures are in a little bit different order than I wanted them to be, but it has taken me so long to load them into Blogger that I am leaving well enough alone!

This is a shrine, and it was explained that the roofs curve so that evil spirits can't alight on them without falling off. It must have worked because there wasn't an evil spirit in sight. 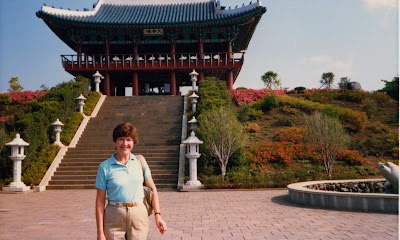 The next few pictures were taken on the veranda at the hotel, and at nearby sights. 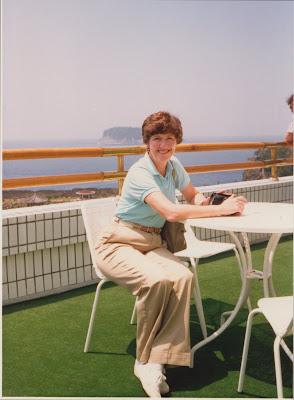 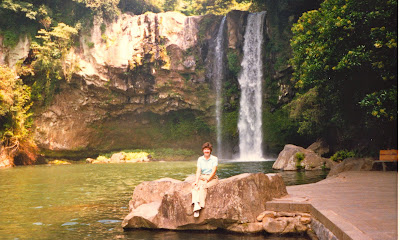 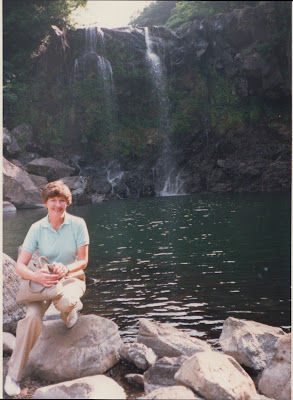 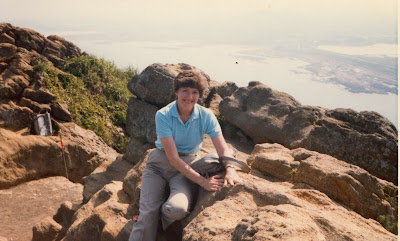 Taken on the grounds of the hotel, and I believe the reflection photo was taken in the vicinity of the waterfall, and finally a couple of me at the hotel's beach. 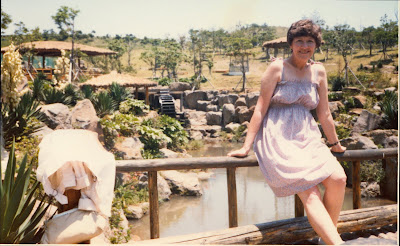 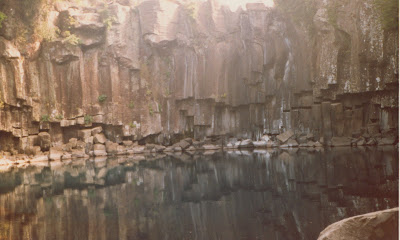 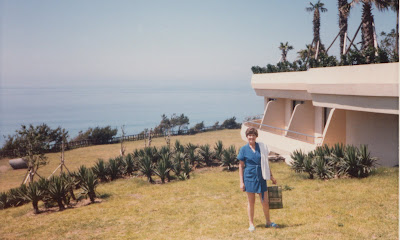 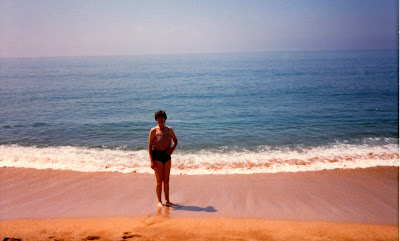 Other pictures I took on this trip are somewhere hiding from me. I loved driving through the countryside, where farmers were drying grain on the side of the road, spreading it out on large canvas sheets and letting it dry in the sun. They would rake it once in a while to make sure it all dried evenly. I saw farming being done with a farmer following a plow on foot, and the plow being pulled by a donkey or ox.

I am very careful in third world countries about drinking the water, and drank bottled water except at the Engineer compound where they had water coolers. One of the men from Washington DC drank from a public trough on Cheju, from a commonly used dipper, up in the mountains. He spent the next week in absolute misery. But the joke ended being on me, because on our last day there I saw a Korean coming out of a water closet carrying the jug for the water cooler. Evidently they used water from the sink where they stored the mops and cleaning items. It must have been ok in Seoul because I never had even a twinge of regret.

While I was there I visited a tailor and had five business suits custom made for me, but the rest of the clothes I came back with were purchased in the markets or on the streets where everything is sold. Haggling is the accepted practice, but I got so tired of it by the time we left I just wanted to go shopping somewhere they would tell me the price and I would pay it. I never did like bargaining over the price of something. Of course when buying a house or other major item you make an offer than is usually less than asking price.

There were many casualties of the war on the streets in Seoul - men who had lost both legs and got around on a square piece of wood with wheels attached to the corners. That part was very sad to me, but to tell the truth those with disabilities usually looked as optimistic as everyone else.

As for Korean food, I didn't like the heavy smell of garlic in everything. I mostly ate bulgogi, which is beef cooked over an open fire. Sometimes you could imagine the taste of the fuel that fired the stove, and sometimes you couldn't. Bulgogi is beef, but for all I know there could have been a bit of dog in it. Just kidding. I liked the ramyan noodles and survived mostly on that. At the Hyatt we could get American food in the dining rooms although the entrees were limited to two or three items each evening.

I truly loved being in Korea and never once did I receive anything but a smile. The Korean women were wonderful, although I find in my travels that most women are friendly to other women, especially to strangers. I probably haven't been in enough parts of the world to make a statement like that, but it has been true for me.

Thanks to Phil for his very interesting comments yesterday. Phil, if you were there in 1953, was that just before the truce was reached? It must have been a rough tour for you nonetheless. I wanted to visit Pusan but just didn't have time to get there. And yes, sometimes you see men in Seoul with those huge wooden tripods on their backs, and you just wonder how they can carry such heavy loads without falling over.
Posted by Gypsy at 10:43 PM