Today was in the high 90's and I didn't do much because I'm not feeling all that well.  But it was sooooo boring, and I hope tomorrow will be better.

My daughter is staying with me and this evening she is going through boxes and closets and wanting to get rid of things I won't be taking with me.  I'm not really ready to let go of some things, although a lot of it can be tossed or donated.  But I want to make the decision in my own time.  Some of you may feel the same as I do - you have to be able to say goodbye to some items that have been with you for a while and have served you well.  At least that's how I feel about it, but I guess I can't be sentimental at this stage of my life.  And thankfully, my new space will be private and will have a separate entrance; the patio will be separate from my daughter's, although they both lead out to the same back yard space.  They will have a two story living space, so they will also have a private balcony off their bedroom.  It will really be very nice and I will try to post photos when they are available.

Not being able to drive is slowly driving me crazy.  It wouldn't be quite as bad if I was in an area within walking distance to something.  It's about a mile and a quarter to the nearest stores, as well as to the place where I get Rocky's nails trimmed.  Since he has to be mildly sedated to let them touch his paws, I wouldn't even think of making him walk that far under any kind of sedation.  So we sit and wait for someone to take us somewhere we need to go.

Jeannie just showed me an old apron the kids had given me years ago.  It had a pitcher of kool-aid on it, and I think they had to send in so many empty packets to get the apron.  She took a photo of me with it on, and I nearly died when I saw the photo.  I haven't lost any weight - maybe 2 or 3 pounds at most - but I look terrible in the picture.  I look like I'm ill! 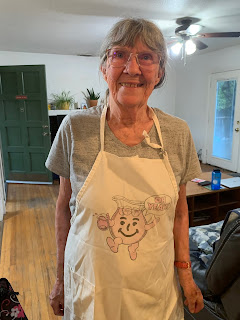 I guess that's enough for today!  See ya soon!